Business Case for Building Information Modeling (BIM), Lean, Green and IPD - What we can learn from an Economist?

January 12, 2011
Vijay Govindarajan recently caught attention for his recent book "The Other Side of Innovation: Solving the Execution Challenge" published by Harvard Business Review and his work on "Designing $300 Home". He is called the strategic innovation Guru and he is also the Earl C. Daum 1924 Professor of International Business at Dartmouth’s Tuck School in US. He believes that perspiration is more important than innovation i.e. execution of an idea is more important than only coming up with the idea itself.

I will try to explain the advantages of BIM, Lean, Green and IPD by his theory of strategic inovation. He talks about three boxes that large organizations operate into (or where organizations' projects fall into)-

Building Lean and Green using BIM and IPD fall under Box-2 and Box-3 that is selectively forgetting the past practices and creating the future (and here we are talking about 20 years from now i.e. about 2030).
Hear is his talk with Harvard Business Review -

Although, Vijay Govindarajan talks about the strategic innovation in all big companies such as GE, IBM, P&G and considers Google, Amazon and E-bay as the fillers that came into existence because rise of internet and lack of innovation in existing players, the question for us is what AEC industry can learn from his work?

I want to focus this post on more fundamental issue for today's AEC firms - the industry leadership in 2030. I believe that companies listed in BD+C's survey report "Top firms by BIM Project Revenue" and corporate members of Lean Construction Institute (LCI), among other industry innovators excelling in Lean, BIM, IPD and Green & Sustainable construction, have already realized the challenges of industry leadership in 2030. Their business strategies are focused on retaining the existing 'performance engines' and developing the 'innovative execution teams.'
Lets elaborate little more on developing the 'Innovative Execution Teams.' The following illustration serves a good example to explain this concept - adopted from the following talk by Vijay Govindarajan at Dartmouth’s Tuck School - 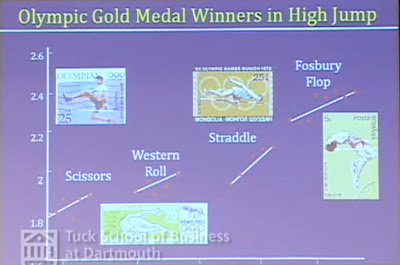 The most interesting fact is that all new Hight Jump Styles were invented by new athletes and not the existing high performers - meaning athletes expert in "Scissors" did not invent "Western Roll" and so on. One of the reasons for failure was that "Scissors" needs the exercise of different muscles than "Western Roll." For AEC industry, building Lean and Green using BIM and IPD need exercising different muscles (skill sets) than the traditional way of doing things.

If we compare the High Jump Style (business model) innovation explained above with the business models that successful AEC firms are using today, then we come to the conclusion that new innovations will belong to new players in the industry. Interestingly, it is not very strait forward. Companies with a strategy for innovation, that takes into consideration all three boxes shown in the figure-1 above, could still lead in the future.

The solution Vijay Govindarajan presents in his book is "Forget-Borrow-Learn." That is, companies need to forget the rules of the core business, borrow selectively from the existing business model and learn to operate in new entrepreneurial space.
These corner stones of strategic innovation are equally true for AEC firms. Adopting new ideas, business practices and technologies (BIM, Lean, Green and IPD) require a little more attention than the attention given to the core business (the performance engines) but these companies need to develop the 'Innovation Execution Teams' for future competition along with maintaining the present competition.

Popular posts from this blog

World's Tallest Building Sky City-1 Changsha China and BIM, Lean and Green - What might be coming?

January 05, 2013
I feel fortunate to be living in an era when there are Computers, iPhones, iPads, Androids, Google Glasses, Google Earth, Facebook, Twitter and Broad Sustainable Construction. All but the last one out of my list are pretty obvious and I do not feel explaining why they are awesome.   However, I feel like talking a lot about Broad Sustainable Construction, a company which is based out of China and doing miracle after miracle and revolutionizing what world calls development. As a matter of fact, China is doing great with several other things too. But this blog won’t be talking about that. At this very moment (January 5 th 2013) Broad Sustainable Construction is building world’s tallest building – Sky City –1, which is almost a kilometer high (838 m/2749 ft to be precise) with 220 floors. They are set to complete the construction of this building within 90 days. This is remarkable and revolutionary. They claim to prefabricate 95% of building off site. Guess what, whole world is tryin
10 comments
Read more

February 07, 2010
Recently I came across this article by Dennis Sowards "BIM and LPS improve project management". Dennis explained LPS-Last Planner System and Building Information Modeling (BIM) fairly well. However, in my opinion there is no point in asking the question "Should we choose BIM over Lean or Lean over BIM?" As Dennis explains in the article that before asking this question "you need to consider what each process offers before choosing one over the other", I would say: lean is a management philosophy and BIM is a technology for effective management of project information. In other words lean is a way of management and BIM is a tool for management. Lean construction is based on a simple principle "reduce waste and increase value." To reduce waste (of time, material, labor etc.) a number of initiatives have been taken, for example Last Planner System (LPS) of production control, Value Stream Mapping (VSM), Target Value Design (TVD) etc. If we closel
2 comments
Read more

August 09, 2012
With much hype about building information modeling (BIM) in last 5-6 years, now (2012) industry has arrived at a point where BIM is in every AECO professional’s dictionary. BIM is not only a fancy world in these professional’s dictionaries but they are using it for various advantages over their non-BIM using competitors. A recent example is the use of building information modeling at at Panama Canal Expansion . It’s all good that BIM is in use and its adoption is increasing exponentially. The question posed to the industry geeks is what is the future of BIM? Well, here is my take on the future of BIM- 1. We will move from 2D display Views to 3D-non-immersive Viewing User interfaces can improve task performance by exploiting the powerful human capabilities for spatial cognition. 3D displays support cognitive spatial abilities. Moving from 2D displays to 3D display will be the next main stream evolution of BIM.   2. We will further move from 3D-Non-imersive viewing to
Post a Comment
Read more